The Storms and Monsoons last month have caused a considerable amount of damage to the Burn Bankings at The 13th and a section of Dune land at the mouth of the Burn.We have also had two land slips above the 8th Green.Our local Plant Contractor Dick Sangster came in between Christmas and New Year .

Dick sourced out concrete blocks and reclaimed the lost section of Dune land  ,we have also put Geo Tex sheeting behind the blocks to protect any sand/material being washed out with any further storms ,after this job he moved to the 8th green where the monsoons had created a bulging overburden of about 150 ton on the north facing bank this had partially slipped down the bank towards our 8th green.Dick removed the material which was threatening the green and regraded the bank.

The  second landslip on the 8th which faces East was different as there was no bulging overburden just a fault line at the top of the path. 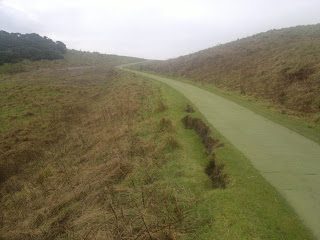 After consulting with a couple of engineering companies ,the best way to fix this problen was with Gabion Baskets. 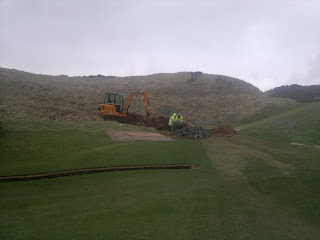 After the baskets have been installed they will be covered with a mesh sheeting and soil and seeded to hide from view. 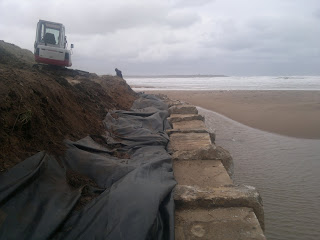 The geo tex sheeting is tucked under the base of the blocks and after back filling has been folded over this will prevent any material being washed away at the base .We will cover the top with sand and are confident that the usual spring gailes will once again start to gather and mask the base of the blocks.Marram grasses will also be planted. 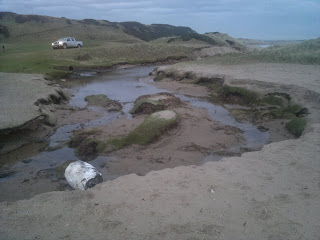 The Burn at the 13th has taken a lot of damage and will be needing considerable work to repair the bankings.